When we opened our first location in January 2014, we didn't make a big splash and contact all the news organisations and tell them that we're some super-amazing place or something. We've noticed others have tried to do that, made themselves out to be the greatest thing ever conceived, I guess to get media and social networks abuzz. But (a) we're actually a little shy, not to mention humble, ​and not at all pretentious; and (b) we wanted to see if word of mouth was still enough in this digital age. You see, we eschew over-use of technology, particularly the whole "looking at a smartphone when I'm RIGHT HERE and you can talk to me" thing. We talked to some marketing people who insisted how we had to have a big online presence, with viral videos, funny memes, etc. But that's not us. We want you to unplug. So it was important to us to see if we could grow and become successful without doing any of that stuff, not relying on online sharing and viral marketing.

So we just opened. And let people walk by us. And enjoyed seeing their whiplash when they saw our shelves with hundreds of board games.

Everyone told us this approach was suicide in the competitive Vancouver restaurant industry. And looking back that was probably really risky. But I'm pleased to say that offline word of mouth is alive and well! Thanks, Vancouver, for showing us that people still talk to each other face-to-face. :)


As part of the word-of-mouth thing, we've never contacted media. But some stumble upon us anyway, and give us a mention here and there.

Board games: Not just for geeks anymore (Vancouver Sun, Feb 2014).
Printed just after we opened, a pretty good article about board games and where people are playing them in Vancouver, not just us.

Where to take the family for cheap eats over the holidays in Vancouver (Georgia Straight, Dec 2014).
Maybe it's not in order of preference, I don't know, but it's cool to be mentioned first in that list.

21 Pizzas In Canada You have To Eat Before You Die (Big Seven Travel, Mar 2019)
The Seven Best Pizzas in Vancouver (Big Seven Travel, Jul 2019)
Spoiler alert: We're quite high up on these lists! Some really fantastic pizzas there too, great company.

Interview with Darryl Boone of Pizzeria Ludica (Test Coast Games, Oct 2019)
Ludica's owner was interviewed on a west coast board game podcast. Ludica's owner can't bring himself to listen to it.

​
If you're in media and need someone knowledgeable about board games to talk to and answer questions, contact us. We lurve games, and know a lot about them.

The full name was originally envisioned to be Ludica Pizzeria & Game Room. However we discovered we weren't allowed to say "Game Room" in our signage! We shortened it to Pizzeria Ludica for the sign and now that's what we typically use day-to-day. You can use either when referring to us, but the latter is probably what most people know us as. (Which makes the word-of-mouth thing even more impressive, when you can't easily tell from the name that we have games!)

What does the name mean? Ludica/ludico is a really obscure Italian adjective derived from Latin. Equivalents are found in other Romance languages (Spanish: lúdica; French: ludique), and even makes an appearance in English (as ludic), though that and the Italian form are pretty much unheard of.

It means "of, or related to, games". So a "pizzeria ludica" could literally describe a pizzeria of games. Which happens to describe us perfectly. 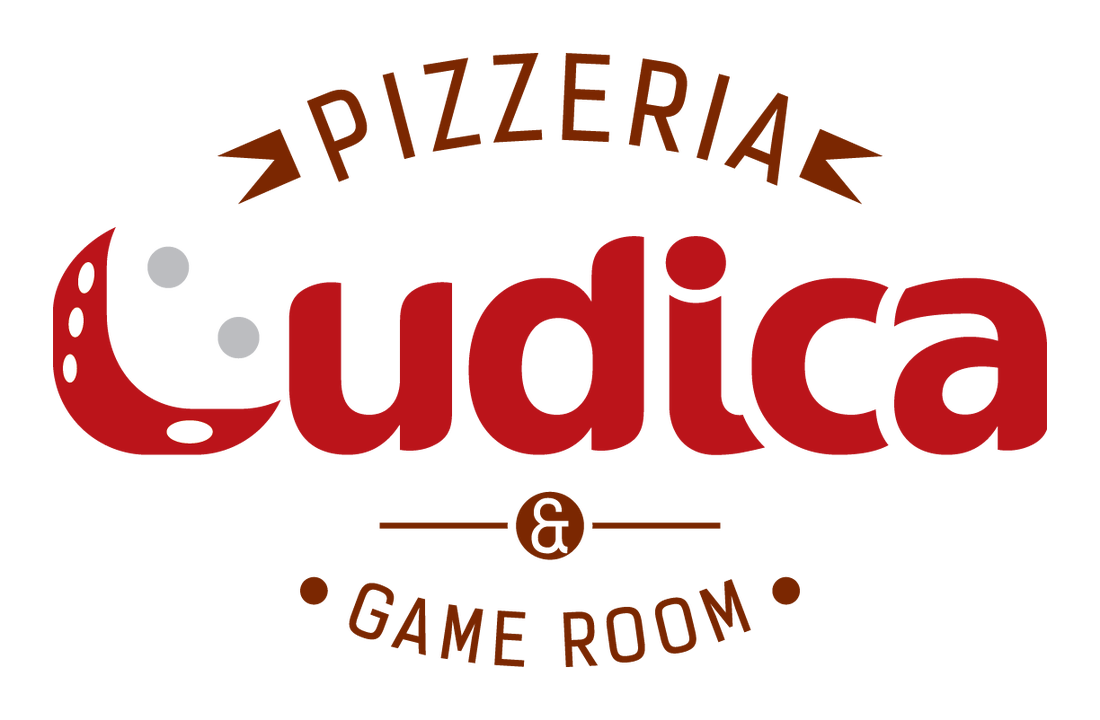